Our Introduction to India: Fort Cochin 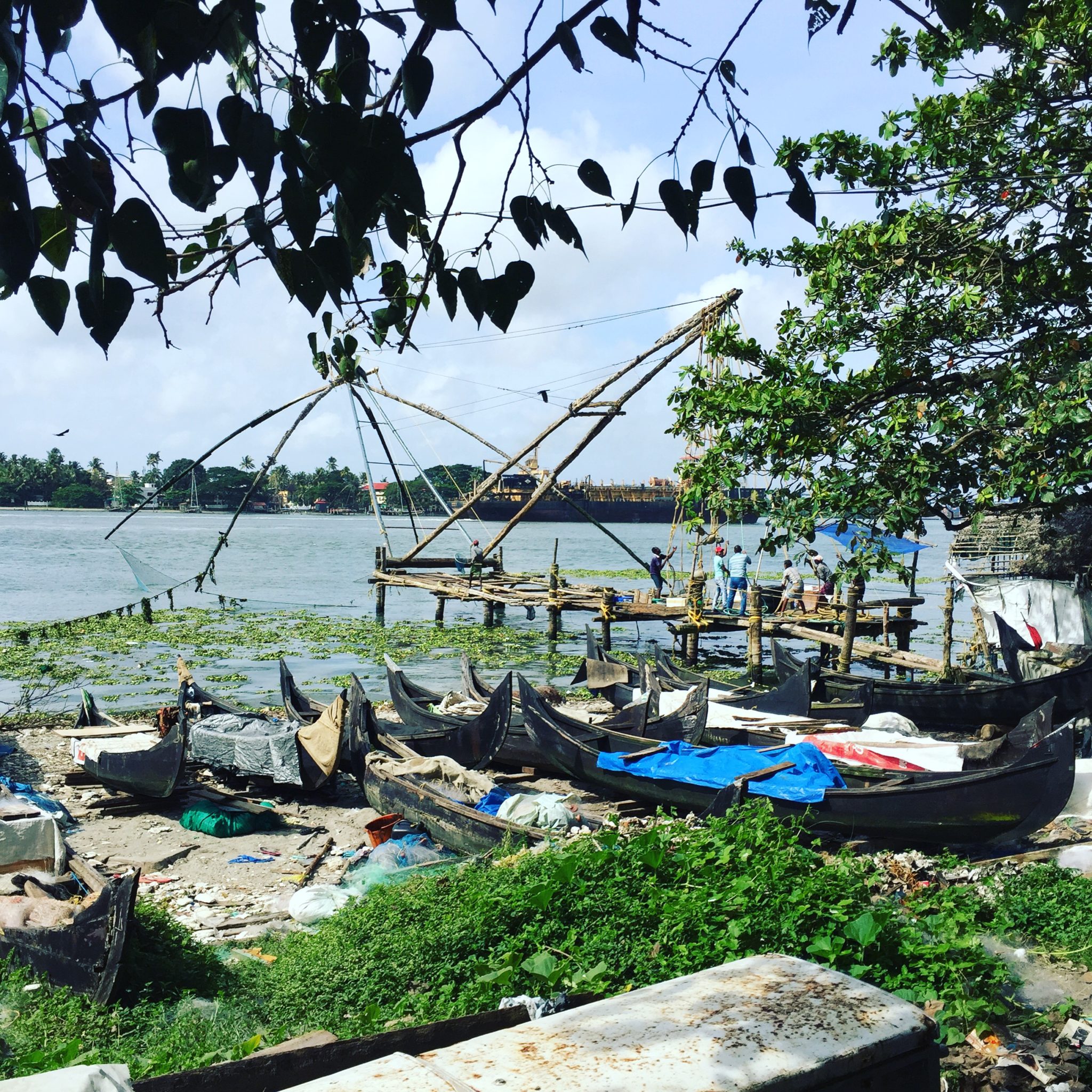 We weren’t meant to go to India.  We had planned to travel to Japan and maybe the Philippines en route to Australia.  But India had been on our wish list for awhile and in researching a different trip to India, I fell in love with the idea of traveling through Southern India.  We have traveled a lot through Asia, but India is always described as being on another level.  Travel in Southeast Asia is easy – follow the banana pancake route, fill up on Phad Thai on Khao San Rd, river tube in Laos, see the many Wats of the region and enjoy the smiling hospitality of the people of SEA.  I had read a lot about traveling in India and the challenges – the dirt and pollution, the scams, the intense crowding and on and on.  So as we lounged in the Mumbai airport awaiting our connection to Cochin (or Kochi), there were butterflies in my stomach.  Why didn’t we take the easy way and enjoy a month on a Thai beach? Was this really smart taking our kids to India?

We arrived into the small Cochin airport and although I had organized a taxi pickup from our guesthouse, there had obviously been a miscommunication.  We were traveling with 5 large bags and the plan was to leave 3 bags at the airport and just use 2 backpacks for our time in India.  Our research on the web had led us to believe that there might be a left luggage area at the airport and so the first order of business was to find it.  Eventually we found it – a little hut behind the parking lot with a security man.  After filling in the ledger and various forms (our first taste of Indian bureaucracy), we left our bags and made our way to the pre-paid taxi stand.  At this point we were feeling pretty good about our start in India.  The taxi was our first taste of the infamous Indian roads and driving, where there are zero rules and even though the roads are two lanes only, cars, rickshaws, trucks all constantly veer around each other on head on collision courses.  The bridge to get to the Fort Cochin area was blocked because of an accident, reassuring! So our taxi had to detour around and I spent the two hour journey, triaging from kid to kid, as they got motionsick.  With plastic bag in hand and many near misses, we made it to our homestay without any actual vomit.  I have never been so glad to get out of a car in my life!

Fort Cochin was an important trading centre and at various times was under Portuguese, Dutch and British rule.  This creates a really interesting mix and it is lovely to walk around the historic fort city.

Fort Cochin is famous for the large Chinese fishing nets and although they are a huge draw for tourists in the region, you find them throughout the Backwaters and it is really neat to see a group of men work together with rocks tied to ropes to raise and lower the nets.

Like many developing countries, the waterfront is quite polluted with garbage along the beaches.  Cochin is a large and busy port and the kids enjoyed watching the container ships being loaded and coming into the harbor.

We hired a rickshaw to take us around to see the major sites.  Fort Cochin and neighboring Matancherry have lovely Catholic churches, Hindu temples and since at one point there was a large Jewish population, some synagogues that date from the 1500s.

We visited the Dutch Palace, which is a lovely and informative museum.  Paul and I could have spent longer, but our kids can only survive so long in a museum.

Of course, even though I had told the rickshaw driver that we didn’t want to stop in any shops, we stopped in a few.  This meant doing the obligatory walk through these massive shops selling everything from furniture to linens and scarfs to jewelry to carvings and on and on.  As soon as we would walk in, the attendants would come to life, the flights would be switched on, AC turned on and chai prepared.  Since we are homeless at the moment and traveling with two already packed backpacks, it really wasn’t very tempting to buy although there are some lovely things.  We visited the dhobi khana laundry where they do laundry the same way they have done it for hundreds of years.  The Dutch brought a group of people from a community in Tamil Nadu here in the 1700s to wash the Dutch Army’s uniforms and the place still functions today mainly doing laundry for the hotels and tourists of Fort Cochin.

The rickshaw driver let the kids drive, which of course was a big hit.

We went and saw a Kathakali performance which are dramatized plays of Hindu stories and feature elaborate makeup and costumes.  For tourists they do a great job of explaining and demonstrating the art.  You arrive early to watch the makeup being applied and then the show begins with some narration in Malayalam and lots of loud drumming and music.

The kids liked it, but it was a little long for them and two of them fell asleep in the performance.  Ella spent most of the performance with her hands over here ears because it was really loud.

Since we had covered all the main sites in the first couple of days, we used our last day in Fort Cochin to take the public ferry over to Ernakalum.  We had heard you can see dolphins on the ferry and we knew there was a children’s playground near the jetty.  Unfortunately we didn’t see any dolphins, but of course it did give us a chance to observe regular local life.

The playground was this large empty  playground with many of its features no longer operating and in various stages of disrepair.  It was empty on account that you had to pay to enter, which reminded us of the lovely park in Nuwara Eliya in Sri Lanka.  Such a shame because it really is a lovely park and you can see how grand it would have been when it first opened 15 years ago.  There was a splash area, covered rollerskate area, computer room, environmentally friendly displays, a train ride – all no longer working.  The kids did enjoy the pedal cars and various swings and slides, which provide a welcome change to the same-same plastic playgrounds we have in Canada.

Back in Fort Cochin, we also enjoyed the smaller Children’s Playground with similar metal slides and structures.

I find it takes me a few days to get acclimatized to traveling and a new country.  There were definitely moments in the first few days that I thought about how we could restructure our trip to leave India earlier.  But we found our groove and settled in and those thoughts drifted away.

After our time in Fort Cochin we headed south to Varkala, a beach side community firmly on the backpacker route.

We stayed at Fort Bridge View in Fort Cochin.  We booked through Agoda – a suite (2400 rupees, $48 CAD) including breakfast.  Not really a homestay, more of a guesthouse.  We had booked through Agoda and there was some confusion when we arrived about the room we booked (we thought we were booking a suite with 2 rooms) since we are a family of 5. They ended up bringing in two extra beds as the room was very large. Great location in the middle of Fort Cochin. Clean large rooms decorated in a traditional fashion with very modern bathrooms. AC worked well. WIFI could be better but this is India. Breakfasts were great with fresh juice and eggs and fruit (included). Staff were friendly and helpful.

Since it was low season, the restaurants were empty.  On the recommendation of our guesthouse, we ate our dinners at a busy, local place – Lucky Star

Paul did manage to get a local SIM card for his mobile and after a few return trips to the shop, he had working data (cost 350 rupees for 2 GB).  He did have to submit his passport, get photos taken and fill in a detailed application. 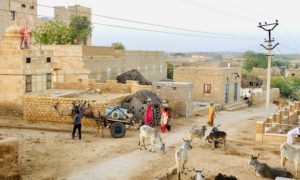 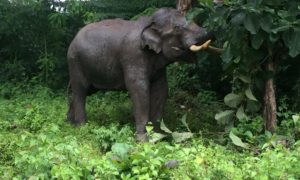 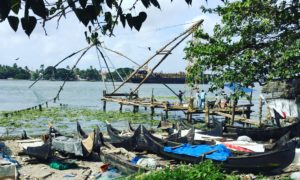 Things to Do in Fort Kochi – an Introduction to Kerala