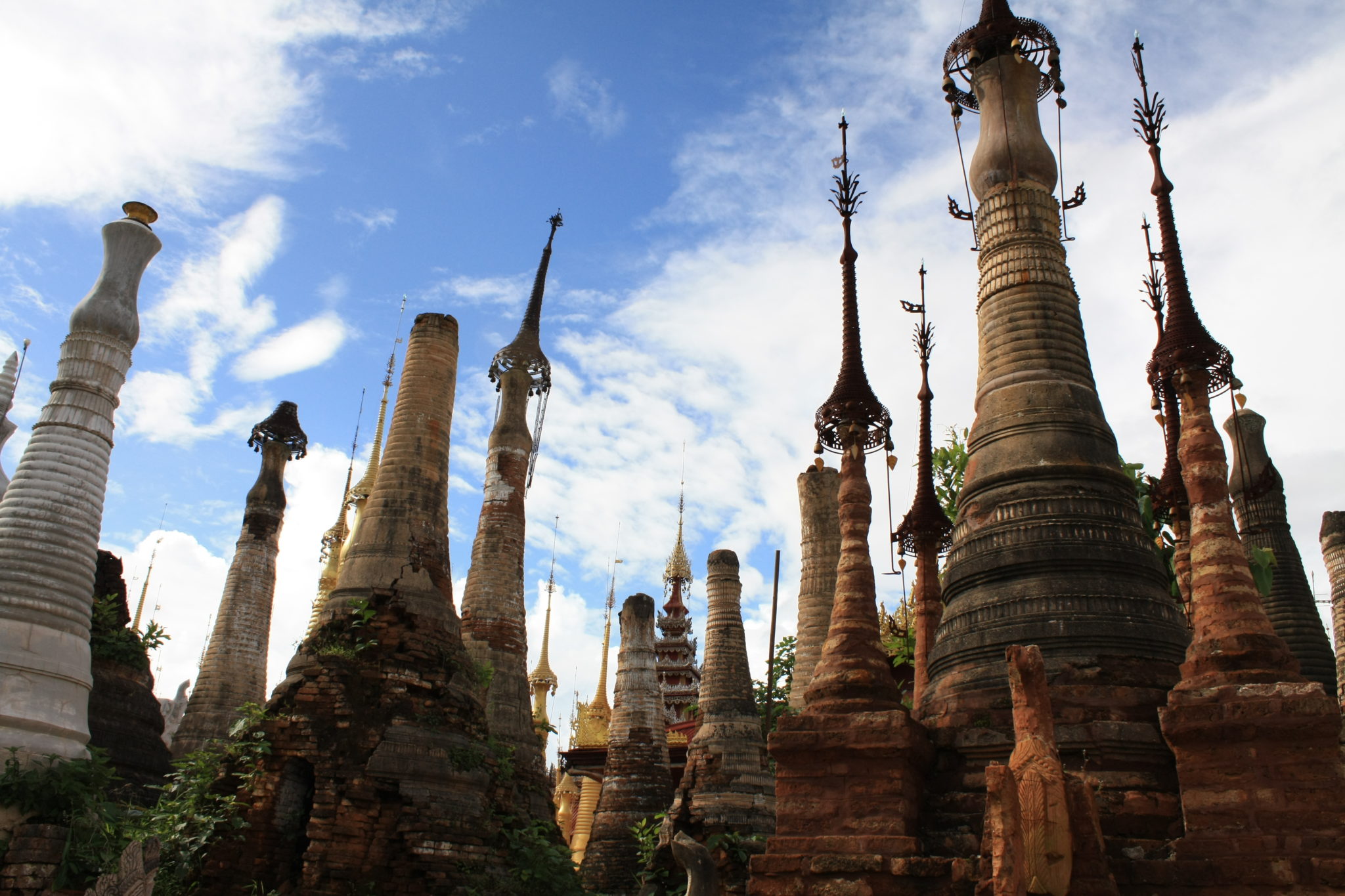 Our office was closed for a few days over Hari Raya and with Dawn and the kids back in Canada I had a few days off to fit in a trip.  Steve, my roommate from University currently lives in Cambodia with his wife Jodi so I thought I would go visit them; but Steve had plans to go to Myanmar for work so I asked if I could tag along.

Steve works for the Household Water Program of Samaritan’s Purse.  His work supplies a simple cheap water filtration system to families that have no access to treated water.  He mainly works in Cambodia, but the program has implemented about 2500 filters in Myanmar.  He teams up with local community groups to implement an entire program of building and installing the filters and doing hygiene training and maintenance of the filters.

Now for a bit of history for those of you that are googling where Myanmar is. Myanmar, referred to by many as Burma with a capital city of Yangon (formerly Rangoon) is located just west of Thailand, but also shares borders with China, Laos, Bangladesh and India.

Myanmar is pretty big by land mass (about the size of Texas) and has about 56 million people (estimated last census was in the 80’s).  As with most of Asia, the British came in aroud the mid 1800’s but handed the country back over in 1948.  Myanmar got bombed by both the British and Japanese during WW2 as Japan actually occupied Myanmar for a few years during the war until the British took it back.

Now back to modern day Myanmar (I use the term lightly). In 1962 there was a military coup and from that point on Myanmar was run by the military.  As a result the country is one of the least developed countries in the world and the WHO ranked it’s health care system last out of 190 countries. Along with pretty weak human rights, accusations of child labour and human trafficing; a military government adds some other quirks to their country.  In 2006, they moved the Capital city from Yangon to Naypyidaw about 350 km north of Yangon.  Here the generals and senior staff get to live in isolation from the rest of the country in quite nice new buildings with paved roads and electricity.   They even built a new version of the Shwe Dagon pagoda in Yangon.  Other interesting things are they limit the number of imported new cars to the country so cars are exceedingly expensive. As a result the place is packed with early 80’s Toyota Corolla’s, most of which are being held together with odd bits of wire and some good luck. To add to the fun of driving, the military decreed that driving would occur on the right rather than the left. Most of the old Toyotas are right hand drive meaning when you pass a car you need your passenger to tell you when it’s clear.  Or,as I saw, cars just pull out and pass when they feel like it and head on traffic gets out of the way.

I arrived in Yangon and met up with Steve and Jodi.  The next day I wandered the city and checked out some of the markets which are always a good experience.  Yangon has many old colonial buildings but most are pretty run down.  One strange experience is the lack of motorbikes. It is illegal to drive one in Yangon, which must be a pain given the cost of cars, but does makes traffic a bit more bearable.

The following morning we flew to Heho, which is about 500 kms north of Yangon.  Here we met up with team members from the local community group that Steve works with and headed to the town of Taunggyi.  Taunggyi is a reasonable large town with a mix of different ethnic groups and not many tourists.  Myanmar has 135 different ethnic groups. We didn’t see another tourist the whole time we were there.  The local Baptist community implements the Biosand filter program in various small villages.  We met with the group and discussed how the program was working and I learned how the biosand filter works.

The Biosand Filter (BSF [took me a while to figure this acronym that everyone kept referring too]) is a slow flow sand filtration system (see photo on Facebook link) that contains a fine sand and an active biological layer that develops in the top layer of the sand and breaks down contaminants in the water, while the sand also filters out larger particles.  The result is clean drinking water at the discharge of the filter.  The materials are cheap and easy to find all over the world so the construction is simple, maintenance is minimal and conducted by the home owner and they last a long time.  It’s amazingly simple and the results are quite impressive.

The following day we were able to go to a local Pa-O village to see the implementation of the BSF.  This was a great experience.  We met with the local pastor whose group is implementing the biosand filter program in the village and about five other members of his team.  Through some translation we introduced ourselves and Steve asked lots of questions about the program. Then we went out and visited with some of the families with the filters.  This was pretty fun to wander throught the small village and see the filters and then see the water sources they were using to collect water.  This village had a few hand dug wells about 10 to 15 ft deep, but the weather seemed to really change the water source quality. Plus run off from villages further up the hill would effect water quality.

The Pa-O as a tribe are apparently afraid of settling near bodies of water and so they set up their villages near the tops of hills, then in some places walk down the hill to get water.  One other problem Steve has run into during the implemenation of the BSFs is one village that only had one word for water; regardless of if it was clean or dirty.  So when his local contact asked for water (to drink) they directed him to the toilet.

From the village we headed to Nyaung Shwe by Inle Lake.  Here we planned to do a day trip around the lake.  Before that we rented bikes and headed out of town to a local vineyard.

It was neat as we happend to time our ride with the end of the school day and ended up biking down the road amongst a group of school kids on their way home.

The following day, we rented a boat for the day and first off headed to the local market.  Inle Lake has a market that each day packs up and moves to a different village around the lake in a five day rotation.  This saves the villagers from having to travel across the lake to a single location.  The market was packed with boats and the first stalls you see are setup for tourists with souveniers etc.  We skipped over this and headed back into the local area full of people selling fish, meat, veggies, and all sorts of other household items.  It was raining so we sat and drank tea and watched all the different ethnic groups do their shopping.

After doing the mandatory visit to the local silversmith, weaving shop and cigar making shop we went to In Dien a nearby temple area.  In Dien was full of old stupas, some have been fixed up but the many had old trees and plants growing out of them.  We climbed up a nearby hill to get a great view over the lake and In Dien.  Afterwards we headed back across the lake to Nyaung Shwe and watched the sunset, skipping the Pagoda where the monks have trained cats to jump through hoops (luckily for us it was closed).

Then next morning I flew back to Yangon and Steve and Jodi were staying in Taunggyi to do more work before heading south to visit more villages.  In Yangon I spent the day wandering around the city.  It is full of nice golden pagodas, churches, mosques and run down british colonial buildings.  At Shwe Dagon pagoda (the biggest in Yangon) I spent a few hours wandering around prior to my flight.

Here, I met Sanga a 27 year old monk who spoke pretty good English.  He offered (for a small “donation”) to show me around the Pagoda. This was ideal as I really didn’t know what all the different statues meant that I was looking at.  We spent more than an hour going through the different sections.  I really don’t know much about Budism, but it was really insightful to hear about all the different parts of the pagoda, the different prayers people do and the different meditation areas.

I had a bit of time before my flight to grab dinner but there wasn’t much to eat around the Pagoda.  On my way out the guy at the ticket booth (they only charge tourists) knew that I was flying home that night as we had chatted earlier on my way in (plus he had volunteered to watch my bag for me while I was in the Pagoda).  He told me it was way too early to go to the airport and told me he would find me a good place to eat dinner.  So he walked me across the street and waited at the local bus stop with me.  The next bus that showed up, he shoved me on (literally pushed me into the bus to squeeze both me and my pack in with the jammed passengers) and told the driver where to drop me off and even paid my fare for me.  I’m not sure who was watching the ticket booth while he was gone?  After a few stops, and a lot of pushing the driver told me to get off.  I was somewhere downtown Yangon near a bunch of food stalls.  I ate some Indian food for dinner then grabbed a taxi to the airport.

Landing at 1am in KL I drove the 3.5 hours home to Ipoh where I slept for 2 hours and then went to work. Coffee cured the lack of sleep, but the quick trip to Myanmar was well worth it.