I have been living in Penang now for 1.5 weeks patiently waiting for our little one to make its appearance.  We are still waiting:)

When I arrived in Penang last Wednesday at our rental condo with the two kids, the reality of the situation came crashing down.  The kids were grouchy after a long day, I was hot and uncomfortable being 8.5 months pregnant and all by myself.  We always knew that this arrangement was not completely ideal, however it was easy to be optimistic about it while planning the arrangements from Ipoh.  Now, the reality sunk in that I was on my own away from Paul with two young kids in an unfamiliar city, in addition to worrying about going into labour on my own here.  It wasn’t the happiest night.  BUT, after that night we have settled in really well to our temporary life in Penang and have been having a really good time.

Penang is an picturesque island two hours from Ipoh and Malaysia’s second most important city.  It is a major tourist destination and home to many foreigners.

We have rented a vacation home for the couple of weeks we planned on being here.  It is a small, but functional 2 bedroom condo on the waterfront.  The one shocker that I found out our first night here was that there was only an air conditioning unit in the master bedroom, which meant the apartment was incredibly hot (average temps here are 35+). I was also not used to apartment style living where you can hear your neighbors and smell what they are cooking.  The routine we have gotten into is Paul arrives Friday evening after work and leaves early Monday morning to go back to Ipoh for work.  We have used our weekends to explore all the great places in Penang we haven’t been.  Prior to living here, we had been to Penang numerous times but usually our priority was shopping and picking up things we can’t get in Ipoh.  Last week our helper Nini came for the week and she will be back again next week.  This has been incredibly helpful to have help with the kids and to get a break, although it did take me a day to get used to having someone else live with us.

Through emails I had met two really helpful women from Penang, a Canadian and a British women.  We  had met for lunch a few weeks before I moved here and after my first terrible night in Penang I sent them an email.  They have been amazing at inviting us to playgroups and over to their homes and we truly feel at home here with friends.  The Canadian women has children the same age and the kids have hit it off amazingly.  There are many more expats in Penang than in Ipoh and they have great facilities and services here for expats.   Penang would be a really great place to live and I’m sure we will miss it when we return to Ipoh.

Since our condo gets fairly hot during the day and the kids go crazy in a small space, we have tried to stay busy on our two weekends in Penang so far.  We are staying in Tanjung Bungah, a beach community sandwiched between Georgetown, the major city on the island and Batu Ferengghi, the major resort area on the island.  Georgetown was an important British settlement and there are many heritage buildings and neighborhoods.  Georgetown has a majority Chinese population, but also has a strong Indian population with a great Little India and of course a Malay population as well.  We enjoyed wandering around the heritage neighborhoods, digging into some spicy Indian curries and of course finding playgrounds for the kids.  The first weekend we also visited a Tropical Fruit Farm where we got to see how the many different tropical fruits are grown and were rewarded at the end with an all you can eat fruit buffet.

Bad business decision by the fruit farm in not charging for kids as our kids ate their way through the buffet in fine fashion.  We also visited a butterfly farm, which was really well done although crowded on the weekend.  There are lots of tourists in Penang from the Middle East and you get used to seeing women in full niqab (head and face covering).  Although the majority population of Malaysia is Muslim, they are more moderate here and the women wear colourful hijabs (head coverings) and often regular street clothing.  Whereas the Saudi women you see in Penang are more conservative and dress in long black robes with only their eyes (if that) visible.  It is fascinating for us and interesting to explain to a 3 year old.  One of the more interesting sights I saw was a women in full niqab going jetskiing with her husband – what a sight!  This weekend we visited Kek Lok Si temple, one of the most important Chinese temples in Malaysia.  It is a vast complex of pagodas, statutes, dominated by a 36 m statue of a Chinese goddess.  Somehow we missed the main car park and found ourselves parked right under this massive statute.

I have never been one to sit at home all day and so I try to plan something each day to anchor our day.  We have been busy with playgroups, visits to our new friend’s homes, visiting the beach, an indoor playground (just like in Canada!), the mall and walks in the Botanical Gardens (to try to coerce this baby out).

I haven’t found the energy to cook much and so we have been eating out most of the time.  Penang food is renowned and we have been enjoying lots of tasty noodles and rice dishes.  It certainly isn’t hard to find spicy food here (another trick I have been trying to get baby out).

Although we have been having a good time in Penang and really do feel at home here, I am getting impatient for the baby to arrive.  It will be nice to return home to Ipoh, have Paul around full-time and get back into a regular routine.  So send us lots of labour vibes and hopefully you will hear a baby announcement sometime soon!

Our New Family of Five - Miles is here! 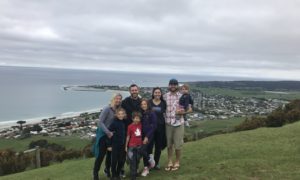 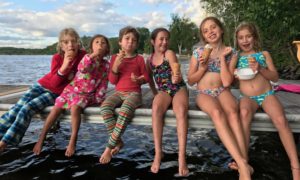 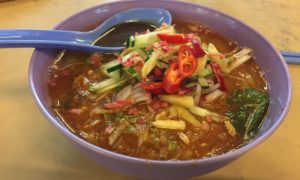 Taking a Food Tour with Simply Enak in Georgetown, Penang 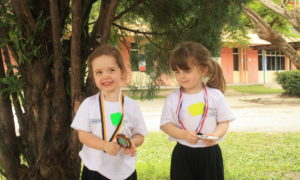