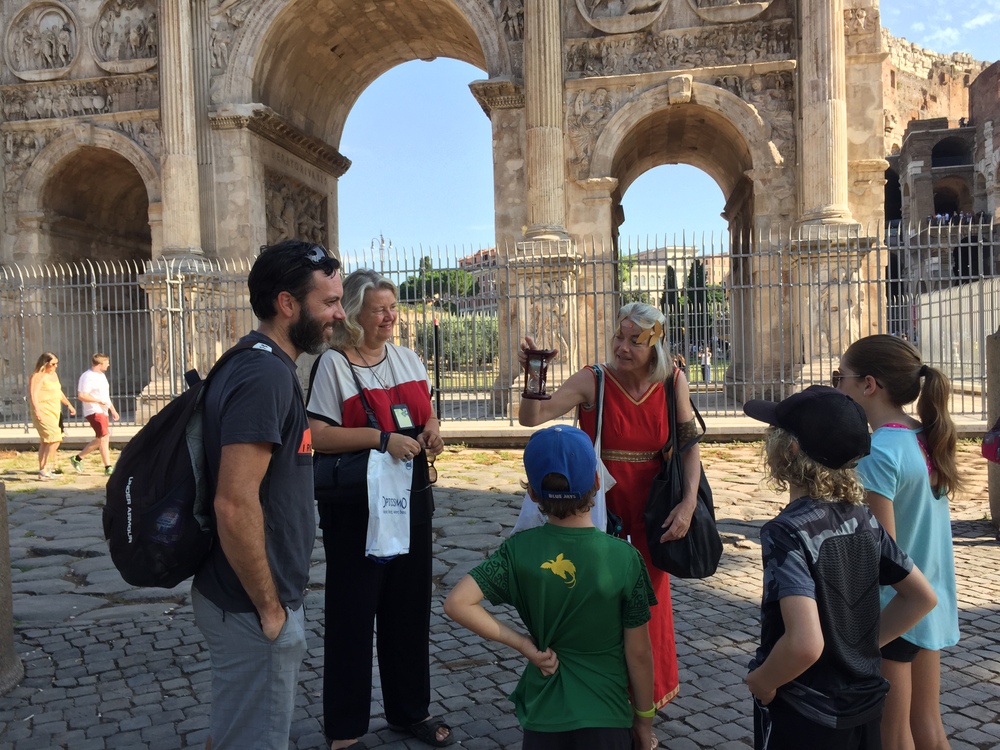 When you visit a city like Rome with so much incredible history, you want your kids to be able to appreciate and understand what they are seeing.  Many tours claim to be kid-friendly, but our tour with Tapsy Tours was the most engaging and interesting kid tour we have ever done.

Aimed at kids 6-12 years old, their half-day tours will have your kids walking away knowing about Bernini, the Barbarians, Rafael and more.  They will know the story of how Rome got its name, learn how to drink out of a Roman water fountain and know why the population of Rome declined from 1 million in 100 AD to 30,000 in a few hundred years.

The tour brings to life the major sites like the Colosseum, Roman Forum, Pantheon and the important piazzas of Rome with the guides role playing important people in history.  It is like a history book coming to life before their eyes.  It is also great if you have a limited amount of time because it visits most of the major sites in Rome.

We all know a good guide is key to a good tour and our guide, Jeanette, kept the kids engaged with her theatrical style.  The tour content and way she delivered it was age-appropriate for the kids, but equally enjoyable for the adults too.

Our tour met at the base of the Colosseum and right away, I knew this would be a special tour.  Greeting us was our guide Jeanette, alongside a women dressed in a Roman-style red dress with a gold crown.  She was Rhea Silvia, a women from 100 AD and shared with us stories of her time. Jeanette, with her enthusiasm and theatrical style held the kids’ interest with the history of what we were seeing, while Marta, the entertainer, made that history come to life.

We learned all about the Colosseum and marveled at the ingenuity of its construction.  With the help of pictures, Jeanette showed us what it would have looked like in 100 AD and the kids were very interested to hear of the gladiator fights, the fate of the African animals brought into the Colosseum  and the naval battles that were reenacted with ships and how they flooded the Colosseum with water.

The kids received their booklets which were filled with activities and a map of the major sites of Rome. They learned what their Roman names would have been (girls add -er, and boys -us) and got name tags to write their Roman names on.  It was activities like this that kept the kids engaged in the tour.  Marta began the story of how her twins were taken from her and raised by shepherds, laying the groundwork for the story of Rome’s name.

Tapsy does have a tour that goes into the Colloseum, but our tour was a more comprehensive tour of classical Rome. From the Colosseum, we headed to the Roman Forum, the political and commercial centre of ancient Rome.  Along the way, the kids had fun spotting “SPQR” on all the statues, fountains and even drains that we passed.  This was the mark made by the government of ancient Rome.

As we looked over the Roman Forum, we learned about how the population of Rome fell from 1 million in its peak at 100 AD, to 30,000, a few hundred years later.  Those fountains all around Rome that we had been noticing were a hint about Rome’s decline. When the Barbarians invaded, they cut off the city’s water supply to its aqueducts, which had previously allowed Rome’s urban population to grow.

As we continued to the top of Capitoline Hill, the kids got to take turns playing tour leader holding the Tapsy sign.  At Capitoline Hill, Marta finished the story of how Rome got its name, due to her son Romulus. The kids then each got to be crowned King or Queen of Rome with a leaf crown and got a photo Polaroid keepsake.

The tour was full of surprises and a great mix of history and engaging activities for the kids. Next up, the kids were surprised to meet Tapsy, the mole mascot.  There was transport waiting for us as we headed to a different area of the city, and skipped forward 1400 years to a different era of Rome.  On the ride, the kids sang along to a cute song about Rome and even learned how to count in Italian.

We emerged at Piazzo Navona in the year 1500 AD.  Here we learned about the father of baroque, Bernini as we heard about the very impressive Fountain of the Four Rivers that anchors the piazza.  We were greeted by Marta, who had transformed to become Donna Olimpia, the sister-in-law of Pope Innocent X.  Donna Olimpia was a powerful woman in her day and it is thought that her influence over the Pope led to Bernini earning the commission for this incredible fountain.  We also learned about the obelisks that the Romans took from Egypt and incorporated into their piazzas.

Next up was the Pantheon.  We had visited on our own previously, but Jeanette, filled in so much information about the history of the building and its transformation throughout time.

The last place we visited on the tour was Campo di Fiori, where we moved forward by 100 years and were greeted by Marta, as a baker in the square from the 1600s.  She had brought us some tasty pizza bianco, which of course the kids hungrily gobbled down.

We all absolutely loved the Tapsy Rome tour.  You could tell that the tour had been expertly planned with kids in mind and offered the perfect blend of learning about history and the sights of Rome, with fun and engaging activities for the kids.  Using a variety of methods like role-playing, activities, interesting trivia, a workbook for kids, all children would find this tour interesting and fun.  But, we parents enjoyed the tour just as much as the kids and walked away with a much better appreciation for the ancient Rome and its history.

You can contact Tapsy Tours through their website to organize your tour.  If you are visiting Rome by cruise ship, Tapsy provides kid-centric tours through many of the major cruise lines, so check the shore excursion tours.

In addition to the fabulous Tapsy tour we did in Rome, they also offer engaging tours for families in Pompeii, Naples, London, Paris, Stockholm and more.

Disclaimer: We were hosted by Tapsy Tours in Rome, but as always, all opinions are our own.

Mythology Tour of the Acropolis with Greeking.Me

Afternoon Tea at St. Ermin's in London with Kids