Taman Negara (is not in Bali) 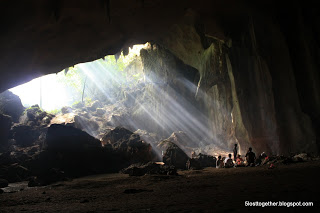 “What do you mean I can’t go to Bali?”  It’s 8:30 in the morning and I’ve just driven 3 hours to KL International Airport to fly to Bali to meet up with Dawn and the kids.  The Air Asia check-in person is holding my passport and explaining to me that I need at least 6 months left on my passport to go to Indonesia; I have 5.  Four supervisors and an hour later, all I’ve been able to do is get a credit for my flight, but they won’t let me fly. I will admit Dawn called me the day she left and told me about the 6 month issue, but I figured they wouldn’t be so strict. Apparently I was wrong.
My only option is to drive to the Canadian embassy in KL to see what they can do.  I get there at 11:45, they close at 11:30 on a Friday, (nice!) but I explain my situation and get to talk to someone. They can get me a temporary passport in 3 days, but since they are closed I need to come back Monday, which means I get it Thursday, which only leaves me 1.5 days in Bali, plus I was supposed to work.  Now what. I can’t go to Bali, the embassy is no help and I have 4 days off from work.  So I went to Ikea.
As a side note, Dawn and I have been wanting to by a cabinet from Ikea but it won’t fit in the car when we have all the kids carseats in, so since I had no where to go I bought it, ate some meatballs and sulked about what to do. In the parking garage of Ikea I talked with Dawn on the phone. After explaining the disappointment, we starting looking for places I could go.  You apparently need 6 months on your passport to go to Camboida, Thailand, Vietnam, Laos and even Sabah (Eastern Malaysia).  The only places I could go were peninsular Malalysia (already there) or Canada (not enought time, or money).  Dawn suggested I go to Taman Negara.

Taman Negara
Taman Negara (which in Malay literally means National Park) is a 4,300 square kilometer tropical rain forest which is thought to be the oldest tropical rainforest in the world as the last Ice Age didn’t reach this area.  So on my trusted travel guide’s advice I headed up to the park.  The next morning I took the 3 hour boat ride to Kuala Tahan which is a small town across the river from the park and is one of two entrances. The only other people in the boat were a french couple on holiday for 2 weeks in Malaysia.  Part of their plan in the park was to spend a night camping in a cave in the jungle.  Since I had no clue what I was going to do, I decided to tag along.
On the afternoon we arrived we took a water taxi across the river into the park, where we did the canopy walk.  It is the longest in the world and consists of a number of suspended walkways strung up to 150 ft high between the large Tualang trees (the talest in Asia).  It’s a neat experience and a bit scary considering the whole thing moves as people walk across it, including the trees that hold the whole thing up.  Being an engineer I could help point out the extra guide wires they had added to help support the large trees.
The next day we started our hike. An 1.5 hour boat ride further up the river took us to our starting point at an old abandoned lodge (Kuala Keniam).  Here we met up with two dutch girls and their guide who were also doing the same trek.  The treking wasn’t too hard, but it was super hot and humid.  Plus, I should add I had packed my whealy suitcase for a few days in Bali, not for treking through the jungle.  Everyone in our group had long pants tucked into their socks and hiking boots.  I managed to borrow a scummy backpack and bought a pair of white sports socks to go with my sandals and shorts; not great for keeping the leeches out.  The guides then sprayed everyones shoes with pemethrin to keep the leeches off. Again, I couldn’t do this with my socks as it would quickly soak through and burn my skin.

Taman Negara is home to a huge number of species including an array of snakes, frogs and insects.  They also have tigers, asian elephants and the sumantra rhinocerous.  During our hike the first day we saw a flying snake, not actually flying but hiding in the trees.  We also, saw signs of elephant movement along the trail and in the afternoon we actually heard a small group moving through the forest.  The problem with seeing wildlife in the jungle is that the vegetation is so dense you can only see a short distance, which means if you actually see an elephant you are probably way too close.  Day one we hiked 8.5 km to Gua Kepayang Besar, a large limestone cave which we would sleep in for the night.  The cave is huge, stretching  about 300 ft across and 100 ft high.  Our guides told us during heavy rains elephants climb into the cave and we could see the old footprints as proof.  We setup our gear to make dinner and went down to the stream for a bath. Dinner was excellent (tom yam, chicken curry, and veggie stir fry) and our guides told us lots of stories about tourists getting lost in the jungle.  Our guide actually found one guy who was lost for 4 days after going on a short day hike in the jungle.  After this we went to sleep, or should I say we tried.  I slept on a rolled out foam pad and my borrowed smelly sleeping bag.  By this time it was pitch black and the jungle is alive with noise. The clanging of pots soon started, and as we got up to check out what was making the noise our guides pointed to the civert cat that was now eating the remnants of our dinner (about 20 ft away).  The returning civert cat, combined with buzz of insects, chirping geckos and the occaisonal splatter of bat poo on my sleeping bag kept me awake most of the night.
The next morning I awoke to the sun streaming into the cave with the beams of light highlighted by the smokey fire.  We packed up our gear and headed out for the last 8 km to Kuala Trenggan where a boat would pick us up.  Due to rain overnight the leeches were out in full force and every 500 m I would stop and pull them off my feet.  Usually, I could get them before they dug in, but my socks were pretty bloody by the time we were done.  After the hike and a short boat ride we were back in Kuala Tahan for dinner, a hot shower and a cold beer.  However, being a muslim country and a small village in the jungle I settled for a cold shower and a warm pepsi.

The honeymoon is over and real life begins 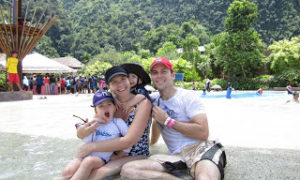 The honeymoon is over and real life begins 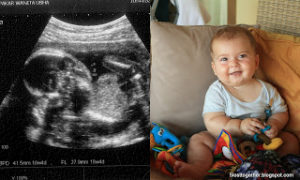 Malaysia: One Year On 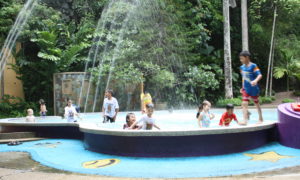